You are here: Home / GimmieBlog / Is Santa Real? How to Break the News of Santa 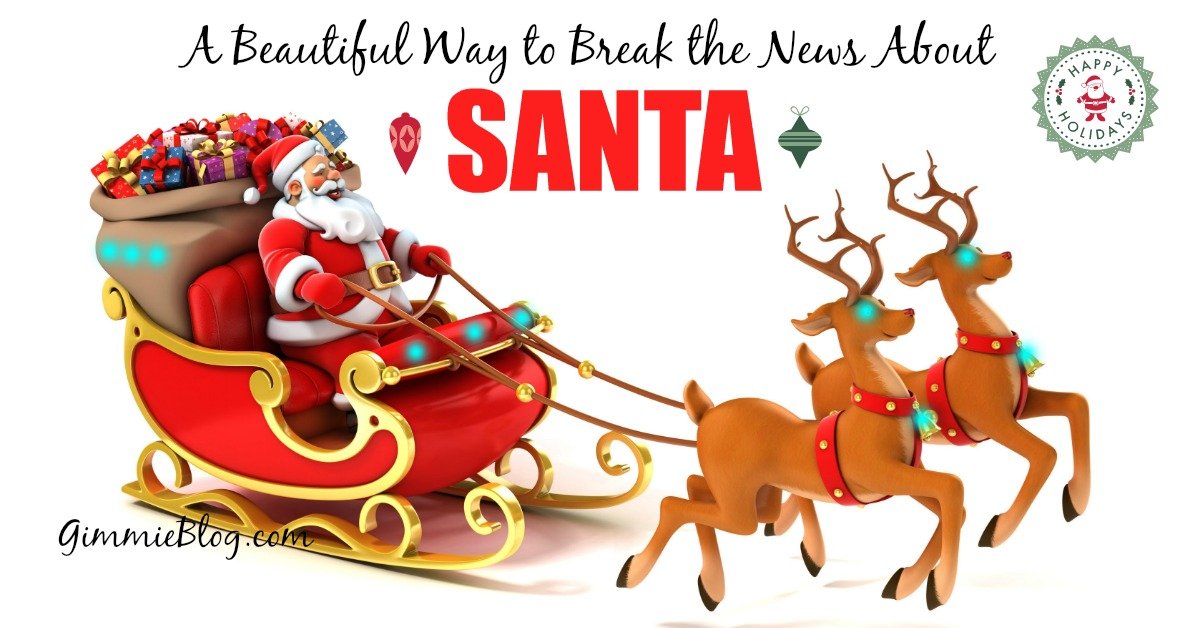 Last night my daughter asked me if Santa was real.

I’ve been dreading this conversation almost as much as the one we’ll have about the birds and the bees.

This isn’t the first time she’s asked. She caught me this past year as the Tooth Fairy. Side note: when I posted on Facebook that I didn’t know who felt worse when my daughter heard the news about the Tooth Fairy my dad replied, “is the Tooth Fairy okay?”  lol!

In the past, I’ve tried breaking the news by focusing on what is real about Santa: the magic he brings to our sometimes drab world. We talked about how the Holidays transform people into loving, caring beings – people who may otherwise get stuck and be self-focused. I’m not saying people are bad, because I don’t believe they are. I think when people are self-absorbed, it’s because they have so much distraction – so much going on in their lives. Myself included.

So, I focused on what is real about Santa. While a fat man in a red suit may not break into your house late at night every year, the joy of secretly giving a gift – no matter how big or small – which will brighten someone’s day… That is real. The excitement of sneaking an anonymous gesture or present, to bring big smiles to kids young and old… That is real. Giving selflessly of yourself in a totally anonymous way, and restoring someone’s faith in humanity by doing so… That is real. Watching your beloved babies in wonderment over an age-old tradition, preparing them for a life of generosity and giving… That is real.

And that’s what it’s all about, in our home: Giving. Whether it’s gift giving, giving of yourself, servitude toward fellow human beings or animals, charitable contributions – we do it all and we do it with love. And, with no strings attached.

I hate to have her be the last one of her friends who thinks Santa is real. I commended her for being so loyal to her beliefs, and assured her that she wasn’t wrong to believe. The spirit of what Santa Claus means is really what is about. And that feeling is as real as it gets.

So, when my daughter asked me if Santa really comes down the chimney to deliver presents on Christmas Eve, I reluctantly answered. I had so hoped for one more Christmas with Santa.

I told her I hoped this wouldn’t change how she felt about Christmas. We talked about the true meaning of Christmas for us: the birth of Jesus, who we also can’t see but believe in. She said, “Mom, what if He isn’t real either?!?” I reassured that we believe He is real, and we live our life trying to be good because of it of our beliefs. So, no matter what, being a good person is a good thing. Same as Santa, the things we do because of him are good… Whether there’s a fat guy in a red suit, or not.

I tearfully told her that when she has children of her own, she will finally, truly know how I have felt being her personal Santa. She will see the wonder in their eyes, and know the joy I’ve had (and will continue to have) having her as my daughter.

She was disappointed, and we cried together.  I cried not because I’d been “caught”, but rather because another innocence of childhood has now passed.

Later, I told my sister what happened.  Years ago it was I who broke the news to her daughter, my niece. Ironically, we had almost the same conversation, right down to questioning whether Jesus is real!  My sister shared an idea she saw online about how to make the transition from believing in Santa.  I love it so much because it suits our family perfectly. I hope you love it too!

The Secret of Being a Santa

In our family, we have a special way of transitioning the kids from receiving from Santa to becoming a Santa. This way, the Santa construct is not a lie that gets discovered, but an unfolding series of good deeds and Christmas spirit.

When they are 6 or 7, whenever you see that dawning suspicion that Santa may not be a material being, that means the child is ready.

I take them out “for coffee” at the local wherever. We get a booth, order our drinks and the following pronouncement is made: “You sure have grown an awful lot this year. Not only are you taller, but I can see that your heart as grown too. [Point out 2-3 examples of empathetic behavior, consideration of people’s feelings, good deeds, etc., the kid has done in the past year.] In fact, your heart has grown so much that I think you are ready to become a Santa Claus.

You probably have noticed that most of the Santas you see are people dressed up like him. Some of your friends might have even told you that there is no Santa. A lot of children think that because they aren’t ready to BE a Santa yet, but YOU are.

Tell me the best thing about Santa. What does Santa get for all of his trouble? [lead the kid from “cookies” to the good feeling of having done something for someone else.] Well, now YOU are ready to do your first job as Santa!” Make sure you maintain the proper conspiratorial tone.

We then have the child choose someone they know — a neighbor, usually. The child’s mission is to secretly, deviously, find out something that the person needs and then provide it, wrap it, deliver it — and never reveal to the target where it came from. Being a Santa isn’t about getting credit, you see. It’s unselfish giving.

My oldest chose the “witch lady” on the corner. She was really horrible – had a fence around the house and would never let the kids go in and get a stray ball or Frisbee. She’d yell at them to play quieter, etc. A real pill. He noticed that when we drove to school that she came out every morning to get her paper in bare feet, so he decided she needed slippers. So then he had to go spy and decide how big her feet were. he hid in the bushes one Saturday, and decided she was a medium. We went to Kmart and bought warm slippers. He wrapped them up, and tagged it “Merry Christmas from Santa.” After dinner one evening, he slipped down to her house, and slid the package under her driveway gate. The next morning, we watched her waddle out to get the paper, pick up the present and go inside. My son was all excited, and couldn’t wait to see what would happen next. The next morning, as we drove off, there she was, out getting her paper — wearing the slippers. He was ecstatic. I had to remind him that NO ONE could ever know what he did, or he wouldn’t be a Santa.

Over the years, he chose a good number of targets, always coming up with a unique present just for them. One year, he polished up his bike, put a new seat on it, and gave it to one of our friend’s daughters. These people were and are very poor. We did ask the dad if it was ok. The look on her face, when she saw the bike on the patio with a big bow on it, was almost as good as the look on my son’s face.

When it came time for Son #2 to join the ranks, my oldest came along, and helped with the induction speech. They are both excellent gifters, by the way, and never felt that they had been lied to – because they were let in on the Secret of Being a Santa.